Need a happy ending for once?  Muna Farah, a Palestinian single mom, struggles with life on the West Bank: checkpoints, a nagging mother, and a failed marriage. When she receives a letter informing her that her family has been granted a U.S. green card, she decides to move with her teenage son to a small town in Illinois.

The film is in English, French and Arabic, with subtitles in white which are generally easy to read.  It has won several awards, including the 2009 Cannes Film Festival Fipresci Prize and 2009 Sundance Film Festival Official Selection: Dramatic Competition Sundance.

This generally upbeat story of Palestinian immigrants to the United States centers on the Arab immigrant’s perspective from several angles:  recent immigrants, earlier immigrants, young girls, a young boy, and professionals.  Though skilled and fluent in 3 languages, they are treated as if they are not good enough.  Generational differences typical of the immigration experience are also dramatized.

The film highlights the difficulty of not feeling “at home” no matter where you are and the tension of impossible choices:  stay in the United States and get harassed while suffering financial pressures, or return to Palestine and be harassed by Israeli officials.

The relationship developed between the immigrant mother and an administrator at her son’s school explores the issue of assumptions involving Arabs, Muslims, and Jews.

My favorite quote:  “Don’t let anyone make you question who you are.”  Mother to son.

After the Last Border by Jessica Goudeau.  Available at the Bandon Library via Interlibrary Loan. 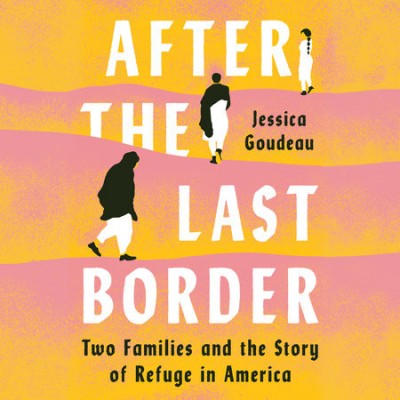 This book traces the immigration of two real-life refugees.  One is Arab: Hasna from Syria.  The account begins when four boys write on a wall a taunt against their school principal.  The taunt is similar to one used against Syrian President Bashar al-Assad.  The boys are detained by government authorities and tortured. Their village, Daraa, is targeted by Assad’s military.  Thus begins the Syrian Revolution against Bashar al-Assad during the Arab Spring.   And thus begins Hasna’s emigration from Syria to the United States.  Intertwined in the personal story is the history of U.S. immigration policy.  Author Goudeau includes what she sees as U.S. immigration policy failures, such as racism.  She also notes successes, such as U.S. President Jimmy Carter’s immigration reform (the Refugee Act).  The author emphasizes that past “terrorists” have come to the U.S. on tourist & student visas, not through what she sees as the well-screened refugee program.