• See No Stranger:  A Memoir & Manifesto of Revolutionary Love by Valarie Kaur. 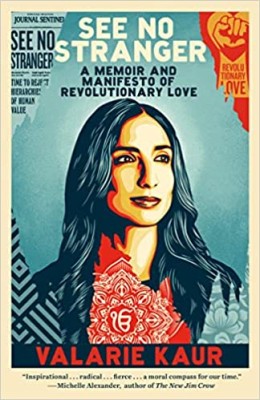 Unrealistic idealism or the gift of imagination that is required to allow us to survive?

In recognition of the International Day of Tolerance celebrated on November 16 and as a great follow up to BIG’s October 29 workshop, Listening to Understand with Andrew Morrison, I would like to recommend See No Stranger:  A Memoir & Manifesto of Revolutionary Love by Valarie Kaur.

Kaur, a Sikh-American, provides advice on how to find peace with yourself, “the other”, and opponents.  She stresses listening to “the other” and opponents and trying to address their fears.  She also stresses the need to care for oneself and recognize the importance of community so you realize that not all is dependent on you.

Kaur begins by noting that transitions in human history often result in fear and anger.  She advises one to approach others with wonder.  Wonder opens us up to others.  Wonder is an admission that you do not know everything.  Kaur has realized that the traditions from which each of us comes hold possibilities for destruction, as well as creation.  Each must choose which parts of their tradition to hold on to.  Kaur has chosen that part of her tradition which allows her to see others as beloved.

When one sees others as beloved, their loss is your loss, their grief is your grief.  In coming together in this way, we are able together to build solidarity and fight for the world we want.  This involves hearing the others’ stories and confessing past injustices:  Native American genocide, African American slavery and oppression, Asian-American exclusion….

Kaur suggests that the United States did not have time to grieve September 11, 2001, since the nation went immediately into a war on terror, casting us against them.  Consequently, many U.S. citizens were vulnerable to a resurgence of white nationalism.  An opportunity for all in the U.S. to grieve together, not just with ones who look like us, could have drawn the connection between our grief and the grief of others, extended a sense of who “us” includes and possibly initiated even global cooperation.

This grieving together for Kaur leads to the act of revolutionary love.  For one works to ease the other’s suffering.  This work is focused on creating the world of justice that we want for all.  Kaur draws from Martin Luther King, Jr, in seeing power without love as reckless and abusive, and love without power as sentimental and anemic.  Power at its best is love implementing the demands of justice.  Justice at its best is power correcting all that stands against love.

Kaur sees the United States’ real enemies as poverty, racism and militarism.  Reading Kaur’s book reminded me of a quote attributed to Heather Hyer, who was murdered in Charlottesville, Virginia, in 2017 :  “If you are not irate, you are not paying attention.”  The anger that Kaur, by the way, opened her book noting as one of the results of transition, she notes can also be a product of love.  This rage, even, she encourages us to harness in order to create a new world for all of us.  Instead of continuing to let “civility” silence the pain, tap the anger for energy and empowerment to listen and reimagine.  She is convinced that there are no monsters, just human beings who have been wounded.

As Andrew Morrison said at our workshop, the purpose of listening is to understand, not agreement, and not even compromise, according to Kaur.  “…help them grieve the illusion that America ever belonged only to them.”

Although Kaur’s distinct tradition may be hard to relate to, I would summarize the book this way:  Choose love, which works for justice by listening to your opponent in order to reimagine a new world for all.  This is done by taking care of yourself, being part of a movement/community, and accepting discomfort as a part of change.

• Begin Again: James Baldwin’s America and Its Urgent Lessons for Our Own by Eddie S. Glaude,  Jr. 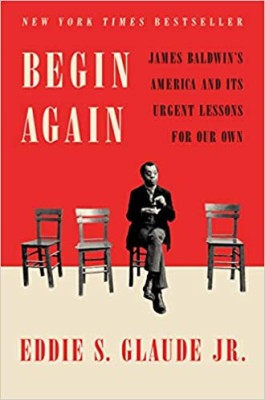 Glaude’s book provides a helpful perspective as we work on “listening to understand.” The author emphasizes that James Baldwin called on us not to force people into categories, but allow them to be free to be themselves and make their valuable contribution to us and the whole of society.  Glaude says when we imprison our fellows in categories that cut off their humanity from our own, we end up imprisoning ourselves.

Baldwin and Glaude (professor of religious history at Princeton University) both emphasize “the lie” that has been told about U.S. history and that there is a need to demand the truth be told about U.S. history so we can “begin again.”  I identified with the events noted in this book which affected Baldwin’s life: the deaths of Medgar Evers (1963), Malcolm X (1965), Martin Luther King, Jr. (1968) and the search for the bodies of three civil rights workers (Michael Schwerner, James Chaney, Andrew Goodman) in 1964 in Mississippi, which resulted in finding bodies of other Blacks that had been killed with no attention paid.  Also, he advocates that the U.S. needs to have a “honest reckoning with what the Age of Reagan has wrought”.

Notably, both Baldwin and Glaude echo Valarie Kaur in terms of the need to love as a solution to racism, even as you realize that you may not be able to change the hearts of some and as you determine to move forward anyways.

Glaude ends the book with a visit to the Atlanta museum of lynching created by Bryan Stevenson, author of Just Mercy.  Glaude’s and Baldwin’s thinking is often summarized in quotes from others, such as the famous quote from Spanish American philosopher, George Santayana:  “Those who cannot remember the past are condemned to repeat it[,]” or Samuel Beckett’s quote:  “Try again.  Fail again.  Fail better.”

Cultural benchmarks, such as John Coltrane’s album “A Love Supreme,” specifically “Psalms: ode to the love of God” beautifully sets the atmosphere from where Baldwin himself is coming when he says:  “[s]alvation is not flight from the wrath of God, it is accepting and reciprocating the love of God.  Salvation is not separation, it is the beginning of union with all that is or has been or will ever be.”

We hope you’ll enjoy this introduction and demonstration of a communication tool known as “Listening to Understand”. In it, two people take turns sharing their view point and beliefs on a contentious topic. While one person speaks, the other engages in active listening, mirroring back what they hear the other person saying and genuinely being present to what the speaker’s experience is. The roles then switch and the listener becomes the speaker and vice-versa. This is a powerful tool for building trust and safety in communication, as well as a de-escalation tool if you ever come across a person with strongly different viewpoints than yours.

When people feel heard and seen, they often soften their stance and become more able/willing to engage in an actual dialogue. In this example, a couple married for nearly 30 years goes through a demonstration covering a contentious topic for both of them: the Grateful Dead. He is a die hard fan, and she truly dislikes their music. It’s one of the places that they have never seen eye to eye and with him being a musician and her cringing each time she hears their music, it has been a sore topic for both of them. Through Listening to Understand, they’re able to have a better understanding of the topic and how it affects each of them.