“Tolerance is respect, acceptance and appreciation of the rich diversity of our world’s cultures, our forms of expression and ways of being human.”

-UNESCO’s 1995 Declaration of Principles on Tolerance 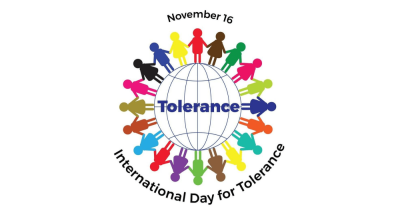 What exactly is tolerance? Some believe that being tolerant of another person’s belief results in giving up something of yourself, as if you are not taking a stand regarding your own beliefs, and not taking a stand against bigotry and hate.

But I see tolerance as a willingness to coexist with others’ views and actions, provided those views and actions do not harm people physically, psychologically or emotionally. Tolerance allows diversity, crucial to a progressive world. According to UNESCO, “tolerance is neither indulgence nor indifference. Tolerance recognizes the universal human rights and fundamental freedoms of others. People are naturally diverse; only tolerance can ensure the survival of mixed communities in every region of the globe.”

Recently, BIG held the “Listen to Understand” workshop, taught by Andrew, during which we learned that to fully listen to another person we must quiet the voice in our head that is actively coaching us to prepare our response. Because, as we focus on our reply, whether in agreement or not with the person’s statements, we are not actually listening. Instead, we are preparing to react and even to make a rebuttal.

Andrew’s workshop taught us to not only listen, but to then repeat what we heard back to the person, to ensure we got it right. Quite often, we don’t get it right, or the reflection causes the person to realize they did not state their ideas clearly. As the interaction continued, practicing listening and reflecting back, we arrived at a clearer understanding of one another’s beliefs.

Does this require tolerance? You know it. Especially during current times as social differences are aggravated, and exposed via the signs everywhere. It’s so easy right now to react quickly to the things going on around us. Just think for a moment about the visuals that trigger our emotions, such as political signs, Covid masks, and homeless camps. Tolerance requires patience and a calming of one’s own emotionality.

For me, it also requires a belief (and a hope) that the interaction can bring something new and good my way, as I have a chance to see into another person’s life experiences for a few minutes. Yes, this doesn’t mean that I give up my own beliefs, but it could mean that I find some commonalities with another person. I’m willing to take the time, take the chance.

Here’s some quotes about tolerance:

Tolerance: the ability or willingness to tolerate something, in particular the existence of opinions or behavior that one does not necessarily agree with. (Oxford Languages Dictionary)

“Tolerance is about how your beliefs lead you to treat people who disagree with you.” (Timothy Keller)

“Tolerance implies no lack of commitment to one’s own beliefs. Rather it condemns the oppression of persecution of others.” (John F. Kennedy)

“In the practice of tolerance, one’s enemy is the best teacher.” (Dalai Lama XIV)

“No one is born hating another person because of the color of his skin, or his background, or his religion. People must learn to hate, and if they can learn to hate, they can be taught to love, for love comes more naturally to the human heart than its opposite.”  (Nelson Mandela)